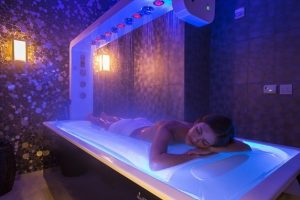 The shower part of the treatment has the individual lying on a padded table. Positioned over the table are multiple shower jets that shoot a stream of water. Most systems will have at least five shower heads or as many as seven. The water is started and is kept away from the table until it is the right temperature.

A table shower massage has many benefits. Initially, the water pressure will increase blood circulation and will also soothe the nervous system. Another is that it will help cleanse the lymph system by moving waste through it. Other benefits are a boost to the immune system and a lowering of blood pressure.

Another method of the table shower is similar to contrast treatment. The first jets of water are warm and slowly get hotter. Once the skin is at the right temperature, cold water is flicked on the body while the hot water shower runs. This helps the body expel waste and oils through the skin.

If nudity or being covered with only a small tower is an issue, then this treatment is best avoided. Alternatively, disposable underwear can be used.